During the regular season, the running back position is usually the deepest when it comes to DFS. Any given week there could be 10 running backs that we could project for around 20 touches. For whatever reason, many of the teams that made the playoffs have split backfields. Derrick Henry and Dalvin Cook are really the only true workhorses left in the playoffs, but they are both expensive and could have negative game scripts as large road underdogs. We can project Jones for the third most touches and we don’t have to worry about game script, as they Packers are listed as 4-point favorites at home against the Seahawks.

Jones has been very hit or miss this season, topping 28 fantasy points (DK scoring) six times and being held under 10 fantasy points five times. I saw a statistic today that he’s one of the few players in football whose efficiency actually goes up with more touches. This could be due to the fact that the Packers give him more touches when he starts the game well, but this plays into the fact that he offers a very high ceiling. Jones is a competent pass-catcher out of the backfield (as long as Aaron Rodgers doesn’t overthrow him every time like he did in Week 17) and should see 15+ carries. He draws a favorable matchup against the Seahawks, who are ranked 26th in DVOA against the run and 21st in defensive adjusted line yards.

Williams is my favorite play of the week. Not just in the Chiefs game or at running back — he is my favorite play at any position. If you are on the fence about the pick, I wouldn’t look too hard at his statistics during the regular season. He was stuck in a timeshare with LeSean McCoy and Darrel Williams and missed a number of games due to injury. However, he took over as the RB1 before getting hurt in Week 11 and then reclaimed the RB1 role in the last two weeks of the season. In those two games, he played on 58% of the snaps, he handled 54% of the carries, and he saw 19% of the targets. He turned 28 rushes and seven receptions into 246 yards from scrimmage and two touchdowns.

With Darrel on IR and LeSean McCoy carrying the football like he’s palming a basketball, this should be Damien’s backfield in the playoffs. It was a similar situation last year when he became the RB1 late in the season and put up some huge fantasy outings in the playoffs. The Chiefs open their postseason campaign as 9.5-point favorites against the Texans, who are ranked 22nd in DVOA against the run and 22nd in defensive adjusted line yards. My favorite part of this matchup is that Houston has allowed more receiving yards to running backs than any team in football. Williams is by far the best pass-catcher in this backfield, he’s going to get the goal line work, and the game script should favor his workload. 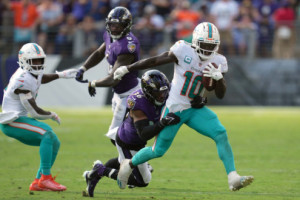 As we will cover shortly, I’m fine pairing Patrick Mahomes up with Williams and Hill or just getting all of my Chiefs exposure through the two position players. It all comes down to roster construction. If I have extra cap space, I’ll go up to Lamar Jackson at quarterback. If I need to save salary, I’ll go down to Russell Wilson. Anyway, we haven’t seen a true breakout performance from the fastest player in football since Week 10 against the Titans. In his last five games of the regular season, Hill topped out at 72 receiving yards. Many will see this as a concern, but I see it as an opportunity. The lack of recent production has led to a much cheaper price point.

The Chiefs should absolutely shred this Texans’ secondary. While they will have success on the ground and while Travis Kelce could have a big day as well, it’s hard for me to envision a scenario where Hill doesn’t beat this secondary deep. On the season, Houston is ranked 26th in DVOA against the pass and 27th in adjusted sack rate. Of the eight teams remaining in the playoffs, they easily have the worst cornerbacks. As you can see from the WR/CB Matchup Chart, Hill has the best individual matchup of the week and it’s not particularly close. He could end up with 100 yards on a handful of targets and I feel confident that we can project him for 8-10 targets in this one.

I feel the least confident in this pick, but Brown is much cheaper than the likes of Jones, Williams, and Hill. Value is tough to find in these short slates and picking the right ones are imperative for your success. While Kenny Stills didn’t have a huge game for me last week, he was much better than Corey Davis, who became the cheap chalk on DraftKings. I actually don’t mind going back to Stills this week if Will Fuller is out again, but we won’t know his status until Sunday morning. Brown doesn’t play as many snaps as most wide receivers, but that’s not the statistic to look at when it comes to the Ravens. They are such a run-heavy team that all we care about is how many routes Brown is running on Jackson’s drop-backs (hint: he runs routes on most of them).

This is one of the cheapest price points we have seen on Brown since the start of the season and the Ravens have everything on the line. While I don’t expect Mark Ingram to have much of an impact on the passing game, it certainly wouldn’t hurt Brown’s appeal if Ingram ends up getting ruled out. Either way, he brings home run upside to the table and we don’t have to pay a premium for him. He draws a nice matchup against the Titans, whose secondary has been playing short-handed in the second half of the season. Without Malcolm Butler, we’ve seen Tennessee get beat deep a number of times. All it really takes for Brown to pay off this price tag is one long touchdown.

As noted above, there are a few different routes you can take at quarterback. I have essentially narrowed my pool down to three players and they are listed as very different price points. Lamar Jacksonis the safest play, but he’s the most expensive. Patrick Mahomes offers a similar ceiling as Jackson and is cheaper, but he doesn’t have the same floor. And finally, Russell Wilson is the cheapest of the three and has the lowest median projection. It all comes down to roster construction on each of the respective sites. Pricing is a little softer on FanDuel, so I’l more likely to play Jackson or Mahomes over there. Assuming value doesn’t open up on DraftKings, I will likely end up on Wilson. To be honest, all of the running backs getting hurt in Seattle might be a blessing in disguise for the Seahawks. Wilson had 48 touches (pass attempts + rush attempts) in Week 17 and had 39 in the Wild Card round. They have no choice but to put the ball in his hands, which is great news for his fantasy production.

Tight end is similar to quarterback in that there are good spends and good values. It comes down to roster construction on each of the respective sites. On FanDuel, it’s much easier to spend up at the position. Pricing is a little softer over there and there isn’t a big gap in pricing between the expensive and cheap tight ends. While I still like Travis Kelce in this spot, I am already rostering Williams, Hill, and potentially Mahomes on FanDuel. For that reason, I expect to land on George Kittle. The Vikings have been tough on tight ends, but Kittle is on another level. On DraftKings, I am having a tough time finding room for Kelce or Kittle. If we go to the value range, the two that stand out are Jacob Hollister and Jimmy Graham. Russell Wilson trusts Hollister in the redzone and this is a better matchup than last week. Graham is only $3,300, he’s a redzone threat, and the Seahawks are ranked 31st in fantasy points allowed to tight ends.